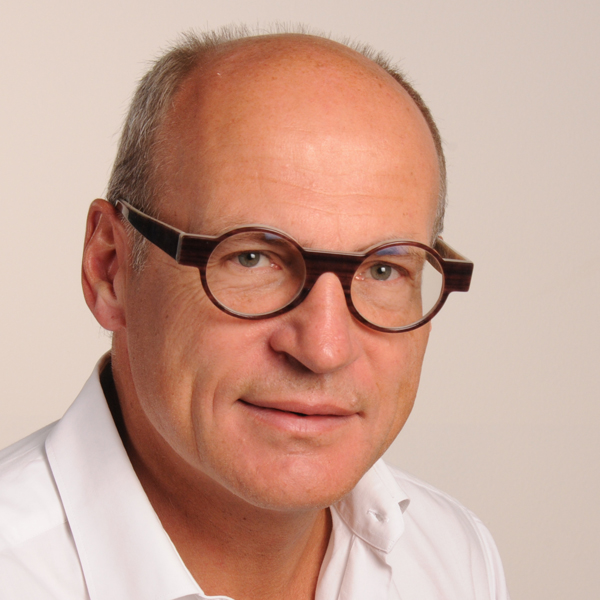 Limits of colorectal liver metastases resectability: how and why to overcome them. Evrard S Recent Results Cancer Res. 2014;203:213-29

Serge EVRARD is Professor of Cancerology (surgery – exceptional class) at the University of Bordeaux. At the Institute, he coordinates the Digestive Tumors Group and the Department of Surgery.
After studying medicine in Nancy (1978-1984), Serge Evrard obtained a doctorate in medicine and a diploma specializing in visceral surgery (1985-1990) in Strasbourg. Laureate of the Faculty, he obtained his doctorate in sciences from the University Paris VII and his Habilitation à Diriger les Recherches (HDR) in 1993. He was named Professor of the Universities-Hospital Practitioner in 1994. In 1999, he joined the Institut Bergonié to complete and develop the Digestive Group. At the national level, he chaired the Société Française du Cancer and the la Société Française de Chirurgie Oncologique, which he co-founded in 2007. At the international level, he is a member of the executive board of the European Society of Surgical Oncology, where he also directs clinical research. In 2014, he created the surgical oncology research platform SURCARE, a collaboration between European Society of Surgical Oncology (ESSO) and the European Organization for Research and Treatment of Cancer (EORTC).

This is a short animated video to explain the positive impact of specialised surgery in the fight against cancer.

Professor Evrard specializes in the management of digestive tumors: stomach, small intestine, colon, rectum, anus, liver, pancreas and peritoneum, excluding eosophageal tumors (not taken care of for reasons of regional organization). He holds consultations every Tuesday and Friday afternoon by appointment (c.fontaine@bordeaux.unicancer.fr ). He participates in the multidisciplinary meeting of Digestive Tumors, which meets on Monday and Thursday evenings. In addition to primary care, Professor Evrard ensures consultations and multidisciplinary meetings for the whole of the Aquitaine Region, in accordance with the Cancer Plan for complex cases from the outset and relapses (hepatic metastases, rectal cancer, peritoneal carcinomas, pancreas, etc.).

Professor Evrard teaches at the Faculty of Medicine of Bordeaux. He participates in numerous postgraduate courses and organizes, in particular, the ESSO’s European advanced course: « Management of colorectal liver metastases » in collaboration with Prof. Graeme Poston, University of Liverpool.

For hepatic metastases of colorectal cancer, the ARF2003 protocol allowed (PHRC 2003) establishing the first prospective series of non-resectable lesions, operated by resection plus radiofrequency ablation. Intraoperative ablathermy has since been considered, in clinical research programs, as a curative procedure that can treat patients, especially those suffering from complex and numerous lesions. These results were awarded a best scientific contribution prize at the International Society of Hepato-Biliary and Pancreatic Surgery congress, in Cape Town in April 2011. The results of ARF2003 were then confirmed on a large scale by a multicenter study conducted between the institute and three other centers: the Memorial of New York, the University Hospital of Aarhus in Denmark and the University of Aintree, Liverpool. The results of this study were presented at the ASCO in Chicago in 2013, at the International Congress of Seoul Hepatic Surgery in 2014 (IHPBA) and are published in Plos One. The ULIIS trial showed the interest of intraoperative contrast ultrasound to diagnose even more lesions during surgery (in the process of being published). Thus, the group has largely contributed to the international success of the liver surgery with parenchymal sparing concept opposing extensive prophylactic hepatectomies.

As a regional reference center for peritoneal metastases (carcinomatosis), the Digestive Group initiated an original trial, COCHISE, which studied the combination of radical and complete surgery with potent chemotherapy coupled with an antibody that blocks replicating cells. The idea was to suppress hyperthermic intraperitoneal chemotherapy (CHIP) proposed by some at the end of surgery. Due to too strict inclusion criteria, the trial had to be closed. However, the team published an article on a series of 50 patients who benefited from the same non-protocol treatment and the results confirm the futility of CHIP hypothesis (Plos One 2015).

Much progress has been made in the past 20 years for rectal cancer; in particular, the risk of pelvic recurrence has decreased from 30 to less than 5% thanks to better surgical techniques coupled with advances in radiotherapy. However, cancers of the middle and lower rectum are treated today despite high morbidity and an essential alteration of the quality of life. A new type of restoration of continuity after complete ablation of the rectum, delayed coloanal anastomosis, could reduce morbidity and above all eliminate the systematic use of a temporary artificial preventive anus. Moreover, this involves much lower costs. The Digestive Group is carrying out the CASCADOR trial which will try to demonstrate, on a multicenter and prospective basis, the interest of this technique (publication expected at the end of 2017).

With the same idea of ​​improving the quality of life of the patients operated for rectal cancer, the Digestive Group studies the consequences of radiotherapy and surgical treatment on erectile function. The METEORR protocol, thanks to a polysomnographic recording, is able to discriminate the functional disorders accessible to a medicinal treatment from organ disorders. The early diagnosis of these disorders therefore allows fixing erectile dysfunction and guides their management.

The protocol ZAK 0 (Unit INSERM Vinco) will be one of the very first phase 0 opened in France. The aim is to test a new targeted therapy, in this case nilotinib, on human colic tumors to be treated surgically and whose management is not modified to respect ethics. This type of approach should make it possible to determine whether the molecule works in vitro in humans.

Other academic or industrial trials in the surgery of digestive tumors are open to the institute. Please check the updated list regularly on our website.

Professor Evrard is particularly involved in the methodology of clinical trials in surgery for which he advocates the importance of the prospective nature of the approach on randomization. His ideas have been in focus in the prestigious review of Nature Reviews in Clinical Oncoloy. In 2014, he headed the research section of ESSO in collaboration with the EORTC. He is the principal investigator of two phase 4 trials to improve the quality of hepatic metastasis surgery: CLIMB EORTC 1209 and DREAM EORTC 1527. These two foremost trials conducted in collaboration with the best European surgical research teams, SURCARE, will dedicate unprecedented financial and human resources to surgical research related to cancer. DREAM has already expanded its base in Japan with the JCOG and in the USA with the MD Anderson Cancer Center, Houston.

The aim of translational clinical research is to transfer to the clinic, to benefit patients, the results of biological research obtained in the laboratory. It is therefore based on a clinician / researcher pairing. The IB Digestive Group has established this link with Majid Kathib’s team (INSERM Research Director (Unit 1029), Chair of Excellence at the University of Bordeaux) on the Metastatic Processes theme.

In order to target an effective treatment against metastases of visceral cancers, an understanding of their biology is necessary. We have shown for the first time in recent studies, confirmed by other researchers, that convertases can be considered as new targets for the treatment of certain cancers and metastases. Convertases are enzymes involved in the maturation and activation of several proteins, such as growth factors, adhesion molecules and proteases, some of which are responsible for the metastatic character of tumor cells. The aim of this research project is to evaluate the clinical significance of these enzymes in tumor progression and metastasis formation in order to use their inhibitors as potential anti-tumor and / or anti-metastatic agents.

A first molecule targeting cancers of the colon and pancreas has just been licensed by a pharmaceutical company (4PPharma) and others have just been patented, pending their preclinical development.

Recently, the Digestive Group of Institut Bergonié and Majid Khatib’s group have been selected by the National League Against Cancer to integrate into the « Tumor Identity Card » program in collaboration with Professor Laurent-Puig of Paris (HEGP). A satellite translational study of the DREAM study will be launched to better understand the genomic heterogeneity between primary colorectal tumors and their metastases.